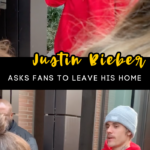 When you are a super mega star, you sometimes have to put up with throngs of adoring fans — that can get a bit rowdy and out of control.

Even the NICEST celebrity can get a little testy when they are hounded and stalked wherever they go.

In Justin Bieber’s case, the fans were gathering outside his New York apartment, and he wasn’t having it.

He was super nice about it, but he had to firmly set the boundaries that sometimes fans forget are and should be in place.

@Vanessafex posted a video on TikTok of Justin just getting home from an outing, and there were fans gathered and wanting things like hugs and pictures.

When one girl asked him for a hug, he had such a nice response. He was polite, he was sincere, and he was right.

I hear you, I hear you. But this is my home. You know what I mean? This is where I live.

I can totally get that. I would freak out if I constantly had people clamoring after me, and then they showed up at my house — a place that should be sacred and private.

He went on to explain why he didn’t appreciate the fans being outside his home, and he did it in the nicest way possible.

I don’t appreciate you guys being here. You know when you come home at the end of the night, and you want to relax? This is my space to do that. So I would appreciate it if you guys could leave.

I’m glad I don’t have to be him, constantly being recognized and hounded, but I’m also glad I’m not those fans who he nicely put in their place.

Good for him for setting those boundaries with his fans.

He can appreciate and love them, but NOT from in front of the place where he lives.

You can see the entire TikTok video with Justin Bieber HERE.