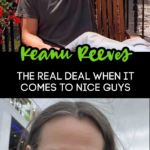 I’ve always heard that Keanu Reeves is one of the nicest guys in Hollywood, and it seems we have proof of just that once again.

Andrew Kimmel — who just happens to be a TV producer for hot shows like The X Factor, Dancing with the Stars, and The Bachelor franchise — recently took to Twitter to share an experience he witnessed at an airport between Mr. Reeves and a young fan.

Kimmel and Reeves were on the same flight from London to NYC. When they got to baggage claim, there was a young fan who wanted Keanu’s autograph.

He nicely obliged, but that wasn’t the end of it.

The kid started a rapid-fire question assault on the actor, and Reeves didn’t miss a beat. He answered every single one of the fan’s questions, and didn’t act upset, put out, or bothered in the least.

Keanu Reeves was on my flight from London to NYC today. A young boy asked for an autograph at baggage & then began to fire off a series of rapid-fire questions. Keanu happily responded to every single one…

Kimmel witnessed the sweet exchange, and is telling the world what a great guy Keanu really is.

When the kid started losing steam on the question train, Keanu took up the slack, and started asking questions of the young guy!

This makes my heart so happy! We often hear horror stories of our ‘Idols’ being complete jerks in real life, but it seems that Keanu Reeves is the real deal.

Of course, as long as Reeves was being such a sweet dude, Andrew Kimmel snuck in for a pic. I can’t blame him. I probably would have, too.

Fans are jumping in the comments to sing the praises of how great Keanu was to the kid.

We all need to be a bit more like Keanu. What a great guy! The world needs more of him.