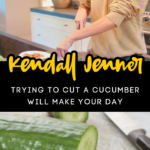 People are flipping out about the way Kendall Jenner cuts cucumbers, and I must say, it’s hella weird.

It has never been more obvious to anyone that Kendall Jenner has never done something as basic as cut a cucumber.

I mean, why would she know how to cut a cucumber? She has enough money to have a fleet of people do it for her.

This week on The Kardashians, we get a glimpse of just how NOT like us Kendall Jenner, in fact, is.

In one scene toward the end of the show, Kris Jenner asks Kendall if she wants the chef to make her a snack.

Kendall decides to go rogue, and make herself a snack — sliced cucumbers.

I have never, in my life, seen someone more inept at her cucumber knife skills.

Instead of turning the cucumber to the side, holding it, and slicing, Kendall does — well, I’m not sure exactly what she does.

She somehow crosses her hands and chips at the end of the long green fruit.

YES, a cucumber is a fruit.

I guess that’s one way to do it?

People are taking to Twitter to comment on Kendall’s cucumber cutting skills, and the comments are hilarious.

Kendall trying to chop up a cucumber just made my entire day. It made me feel a bit more competent at life.