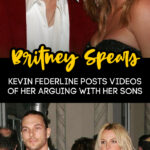 Kevin Federline just took to social media to post videos of Britney Spears arguing with her sons, and I’m not sure how to feel.

Let’s be honest. We’ve all been there.

Let me just say, maybe I wouldn’t drop the F-Bomb with my kids, but it could totally be any parent in these videos.

In one video that Kevin posted, Britney is having words with her son because he wasn’t wearing shoes out in public.

Um — I think I’ve probably had this VERY SAME conversation with my son.

Besides the continued use of the F-word, I really don’t see much wrong with this video.

The only problem here is that they seem to be setting Britney up. Her son should never have been allowed to video her.

I don’t know. Maybe I’m weird. I just don’t see what’s wrong with grounding your kid for doing something inappro-pro.

How else are they going to learn to be civilized adults?

Isn’t that kind of our job as parents?

In another video posted by Kevin, Britney is confronting her kids in their bedroom about the fact that she is the mom, and it’s her house.

I mean, she’s their mom. It’s her house. She’s not wrong.

Now, the videos have since been deleted from Kevin’s social media account. But, IMHO, they should have never been posted in the first place.

He posted the videos after Britney have made numerous comments about her boys publicly.

When he posted the videos, he captioned it:

“I can not sit back and let my sons be accused in this way after what they’ve been through. As much as it hurts us, we decided as a family to post these videos the boys took when they were 11 & 12. This isn’t even the worst of it. The lies have to stop. I hope our kids grow up to be better than this.”

You can see Kevin Federline’s videos of Britney Spears HERE.