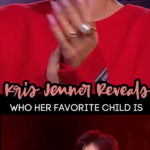 One of the most common questions the Kardashian family asks is which one of the kids is Kris Jenner’s favorite!

And finally, that answer has been revealed!

During an appearance on “The Late Late Show” with James Corden, Kris Jenner answered which Kardashian or Jenner is her favorite, but it didn’t come without a bit of pressure.

Hooked up to a lie detector test, Kris also revealed in another question that Kim Kardashian did not rip the famous Marlyn Monroe dress when she wore the stunning gown to the Met Gala.

While answering other burning questions, Kylie asked her mom in confidence if she was her favorite child.

“Am I your favorite child?” Kylie asked to her mom.

Before responding, Kris explained that her answer may not go over and that she might possibly be unable to return home!

“I can’t go home,” she joked to James Corden and Kylie.

After hesitating a few moments to answer the nerve racking question, Kris publicly confirmed on television that her favorite child is indeed Kylie, but we all secretly knew that!

After answering who her favorite is, you can check out her other candid responses down below, because lets just say that James and Kylie did not hold back on the questions!