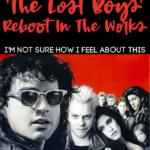 You guys, I really am torn on this, ‘The Lost Boys’ is one of those movies that I have watched many times… I’m old and it had ‘The Corey’s’ in it.

Well, Warner Bros. has announced that they are indeed rebooting the vampire movie, and they’re saying it will be a brand new, reimagined take on the original.

When I read something like that my first thought is if it’s brand new… why not make it a NEW movie with a different name and leave the old iconic movies alone?

I mean, how are they going to top this scene…

There has been talk for a long time about creating a TV series of ‘The Lost Boys’, but obviously that never happened.

The reboot of ‘The Lost Boys’ movie will star Noah Jupe from ‘A Quiet Place’ and Jaeden Martell from the ‘It’ movies.

There hasn’t been much information released yet, but we do know that the reboot will take place in the present.

The word is that the reboot will follow two brothers moving to a new town where they discover vampires, sounds quite a bit like the original right?

Randy McKinnon, will write the new movie and Jonathan Entwistle will come on as the director.

The original film was a huge hit when it released in 1987, and while I have my doubts about the reboot, I’m sure I’ll still give it a chance and watch.

To be completely honest, I never even watched the other two ‘The Lost Boys’ movies…

I guess I’ll just have to wait and see what happens with this, I actually hope they do well!