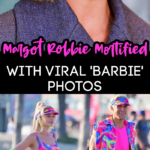 Margot Robbie spilled on how she really felt about the viral ‘Barbie’ photos with Ryan Gosling.

Lets just say even though was she laughing on the outside, she felt much differently on the inside!

In an recent interview with Jimmy Fallon, Margot says she was actually mortified in her colorful Barbie outfit alongside Ryan.

After paparazzi snapped a few photos of Ryan and Margot dressed from head-to-toe in Barbie attire, the photos showing behind-the-scenes shots quickly rose to viral status.

“I can’t tell you how mortified we were, by the way,” sheexplained to Jimmy Fallon. “We look like we’re like laughing and having fun, but dying on the inside. Dying. I was like, ‘This is the most humiliating moment of my life.’”

Not to mention, she didn’t believe the photos would gain as much attention as they did even with the outfits she admitted she assumed would stand out on the beach.

On the bright side, at least they got to go rollerblading for the day!

And you can watch the full interview with Margot Robbie and Jimmy Fallon down below!