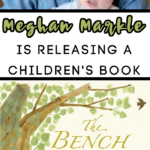 Meghan Markle is releasing a children’s book, and it is totally inspired by Prince Harry and her son, Archie.

The book, which is called “The Bench,” is going to be about the bond between father and son.

But here is the super sweet part — it’s looking at that paternal bond through the eyes of the mother.

Inspired by her own husband and son, The Duchess of Sussex’s debut touchingly captures the evolving and expanding relationship between fathers and sons and reminds us of the many ways that love can take shape and be expressed in a modern family.

It is obvious that Meghan likes to write, because the book came about from a poem she wrote to Harry on his first Father’s Day.

That poem became this story.

The book is going to be 40 pages long, and is for parents to read with their 3 through 7 year old children.

My hope is that ‘The Bench’ resonates with every family, no matter the makeup, as much as it does with mine.

“The Bench” will have beautiful watercolor illustrations done by Christian Robinson, who has worked with Pixar Animation Studios and The Sesame Street Workshop.

Meghan says that the illustrations in “The Bench” are supposed to summon up feelings of the “warmth, joy, and comfort of the relationship between fathers and sons from all walks of life.”

The book is set to be released on June 8th — just in time for Father’s Day. *Winky Emoji*

Prince Harry and Meghan are expecting their second child, a girl, this summer.

I know Meghan will continue her love for reading and books with her second child, as well as with Archie.

You can pre-order “The Bench” now on Amazon, but remember it isn’t due to be released until June.