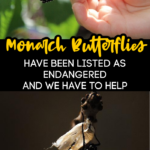 Monarch butterflies are headed toward extinction and this is not good in any way, shape, or form.

For the first time ever, the monarch butterfly was added this past Thursday to the International Union for the Conservation of Nature “red list”.

The “red list” is a list of species that are being threatened ,with extinction and are now categorized as “endangered”.

It’s just a devastating decline. This is one of the most recognizable butterflies in the world.

We all know the monarch butterfly, it’s the gorgeous orange and black butterfly, we even have a local festival here that releases thousands of them every year.

What we’re worried about is the rate of decline. It’s very easy to imagine how very quickly this butterfly could become even more imperiled.

The International Union for the Conservation of Nature has estimated that the population of monarch butterflies here in North America has ddropped between 22% and 72% over just 10 years.

This percentage number changes depending on what method of measure is used.

Nick Haddad, who is not a part of the listing, has said that his estimates on the population of monarch butterflies he studies in the eastern United States have had between an 85% and 95% decline just since the ’90s.

Did you know that monarch butterflies in North America have the longest migration for an insect, longer than any other insect known to man?

They spend the winter in the mountains in central Mexico, then they migrate north… breeding along the way.

The offspring will go all the way to southern Canada, and then they have to migrate back down to Mexico.

There are some groups that will spend the winter in coastal California instead of Mexico, and then in the spring they head out through the western states.

So what’s to blame for this rapid decline?

According to Emma Pelton of the nonprofit Xerces Society, it is a loss of natural habitat, and an increase in the use of pesticides as well as herbicides… kind of a no-brainer and this is why I don’t use these products.

As of right now, the United States has not yet listed the monarch butterflies under the Endangered Species Act, but environmental groups are pushing for it before it’s too late.

There are things we can do to help, and we all really need to step up on this!

One of the easiest ways to helo is to plant milkweed!

Check out Save Our Monarchs right now to see how you can help!