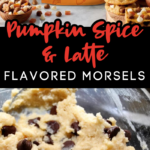 Who ever was the first to combine pumpkin spice flavoring with caffeine should get a raise considering the duo has created countless of fall traditions including #pumpkinspice photos and pumpkin picking with a latte in one hand and an orange pumpkin in the other.

Like all traditions, Nestlé Toll House is bringing something new to the table including morsels that just scream the fall season.

With that being said, Nestlé is introducing pumpkin spice and latte flavored morsels so your house smells like fall during the cooler months and your cookies taste like a coffee!

The new bag of chocolate chips include premier white chocolate, mini coffee biscuits (because what’s an order of a tall latte without a scone) and finally, pumpkin spice flavored chunks.

Thanks to Nestlé, the bright orange bag won’t be hard to find in grocery store shelves (hopefully coming sooner than what we hope) or will it… considering retail stores and supermarkets turn everything over to orange, white, and black.

To the baking aisles we briskly walk!

2 shares
You Can Get A Starbucks Cauldron Mug For The Witch In Your Life
← Previous
This Horror-Themed Photoshoot is Best Friend Goals
Next →
Click here to cancel reply.