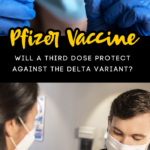 Many Americans are doing their part to eradicate the COVID-19 virus by getting vaccinated.

They are getting the standard 2-dose vaccine that promised protection against the harsh side effects from catching the coronavirus.

(Unless they got the Johnson & Johnson version of the vaccine, which is a one-dose vaccination)

But, then this nasty Delta variant popped up, and now we are all questioning whether getting this two-dose vaccine was indeed helpful against all variants of the coronavirus.

Let me preface this by saying: I am not a doctor.

Also, this data has not been peer reviewed or officially published, so take it for what it is — recommendations by the company who produces the Pfizer vaccine.

Pfizer has posted data online that strongly suggests that the public get a THIRD booster shot of the vaccine.

[The data] suggest that antibody levels against the delta variant in people ages 18 to 55 who receive a third dose of vaccine are greater than five-fold than following a second dose.

I mean, I just barely made the decision to bite the bullet and get the two-dose vaccine. Now they are saying I need a THIRD dose?

I am not so sure about that. The side effects from the second vaccine were pretty gnarly in my system (everyone reacts differently to the vaccine). I’m worried about what a third dose would do.

The Pfizer data is saying that persons 65 to 85 really responded positively to a third dose.

Antibody levels against the Delta variant after receiving a third dose of vaccine [is shown to be] greater than 11-fold than following a second dose.

Of course, a third dose of the Pfizer vaccine would also produce more antibodies against the original virus.

(Wasn’t the second dose for that?)

There’s an “estimated potential for up to 100-fold increase in delta neutralization post-dose three compared to pre-dose three,” researchers wrote in the Pfizer data slides.

Although Pfizer has published this information online, they are expected to discuss the efficacy of a third vaccine during their next earnings call.

So, what do you think? Is a THIRD Pfizer dose in your future?

No word on whether the company who produces the Moderna vaccine will follow suit in recommending a third “booster” shot.