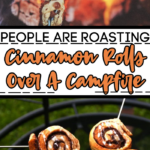 Fall isn’t the only season dedicated to camping and in addition to the hot weather also comes with its sidekick the Recreational Vehicle, aka the “RV” because it’s officially camping season!

Whether you enjoy nature with a camper or in a tent, everyone can agree that along with the open road and the great outdoors, you can’t officially call it a camping trip without a decent size campfire.

Anything you can cook on a stove or in the oven can basically be cooked over a fire, but the main food groups that take priority when it comes to the open flame are hotdogs, hamburgers, steak, s’mores, sausage, eggs, etc.

Aside from the usual meals cooked over a flame, individuals via social media have been posting a new food group that’s better cooked by the fire and it comes in a dessert.

The Pillsbury Cinnamon Rolls you crack open in a small tube are being cooked straight from the can and over the fire for roasting.

The benefits of cooking cinnamon rolls over a bonfire is the smokey taste you get from the fire, combined with a crispy outer layer with a soft goeey inside.

You can either wrap the biscuit dough around a metal skewer to make “cinnamon twists”, or shape the dough in a circular layer as per usual and roast until perfection.

Keep in mind that the white glaze is better when it’s melting off the warm cinnamon roll straight from the fire and into your mouth. 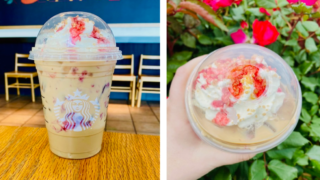 Next
You Can Get A White Chocolate Raspberry Cake Latte From Starbucks That Is Dessert In A Cup
Click here to cancel reply.

Seems like it would burn before the insides cook through, easier to just wrap in foil and put into the grill after grilling, while still hot.