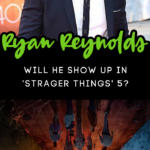 I’ll gladly watch ANYTHING that has Ryan Reynolds gracing the screen with his acting expertise.

Back in March, it was leaked that Shawn Levy will direct Ryan Reynolds in the upcoming threepeat of Deadpool.

This won’t be the first time that Shawn Levy has had the privilege to work with Mr. Reynolds.

He directed Ryan in Free Guy — my husband is OBSESSED with that movie — and in The Adam Project, which came out on Netflix earlier this year.

If you haven’t seen The Adam Project, stop reading this article right now, and go watch the movie.

We know that the 5th season will be the last for Stranger Things, so they better get working on that collab now!

I want to see a Ryan Reynolds cameo in anything. The truth is, my career over the past half-decade has been defined by Stranger Things and my collaborations with Ryan, so it would be deeply trippy but satisfying to see my two worlds collide. So, Ryan Reynolds, get ready for season five.

It might be that Ryan shows up with an uncredited cameo appearance.

This wouldn’t be the FIRST time that he has been in some form of entertainment uncredited.

He made an appearance in Ted and A Million Ways to Die in the West.

Ryan also happened to randomly show up — along with TONS of other celebrities — in Taylor Swift’s music video “You Need to Calm Down.”

I love it when he just pops up! If you blink, you’ll miss his cameo.

But, I would be ecstatic if Ryan were to show up in a Levy-directed Stranger Things.

It is very much the bromance that you see.

We feel really lucky that we found each other. Creatively and spiritually, we’re so aligned. — We’ve never even had a fight. We’ve disagreed on a million things, but it’s never muddied with a weird emotional experience, which can happen in the arts.

So, cross your fingers and toes. We may get a Levy/Reynolds collab in the future, and I can’t wait!!

Luckily, we don’t have THAT long to wait for Stranger Things 4: Volume 2. It is set to drop on July 1st.

But, never fear. According to Esquire, episode 1 will run about an hour, and episode 2 will clock in at a huge 2 hours and 30 minutes long.