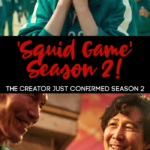 ‘Squid Game’ was a HUGE hit for Netflix and it’s not surprising to hear that the creator has just confirmed a season 2!

I’m still working on finishing watching season one and have avoided reading much about the show so that I don’t accidentally see spoilers.

When I saw the announcement I just had to let you guys know right away because I know how into it many of you were.

I saw so many ‘Squid Game’ costumes this year, mainly on teenagers and adults.

The series creator, Hwang Dong-hyuk, spoke to the Associated Press about ‘Squid Game’ and the huge hit it was on Netflix.

In fact, Netflix’s CEO had predicted that it would be the biggest series hit for Netflix and he was right!

A mysterious invitation to join the game is sent to people at risk who are in dire need of money. 456 participants from all walks of life are locked into a secret location where they play games in order to win 45.6 billion won. Every game is a Korean traditional children’s game such as Red Light, Green Light, but the consequence of losing is death. Who will be the winner, and what is the purpose behind this game?

At first, Hwang Dong-hyuk had said he was “considering it” when asked about a season 2, but that has changed and it’s happening!

Here is what Hwang Dong-hyuk had to say about Season 2:

So, there’s been so much pressure, so much demand, and so much love for a second season. So I almost feel like you leave us no choice. But, I will say there will indeed be a second season. It’s in my head right now. I’m in the planning process currently. But I do think it’s too early to say when and how that’s going to happen.

So what about you Were you super into it and ready for a second season, or were you like some people and thought it was just “ok”?