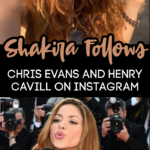 Shakira and Gerard Pique have recently announced their split after 11 years of marriage; since then, the two have come together to release a joint statement via their PR agency that read,

“We regret to confirm that we are separating. For the wellbeing of our children, who are our highest priority, we ask that you respect their privacy.”

Less than 48 hours after splitting from husband Gerard Pique who has reportedly cheated on Shakira, fans of the singer noticed the star following other celebrities on Instagram.

After hitting the follow button of two “super humans”, the internet already has started to ship possible suitors for her after two recent Instagram follows.

And while Chris Evans has already followed her back on social media, Henry has yet to do anything with the follow, but while fans have shipped both Evans and Cavill, Henry is already taken.