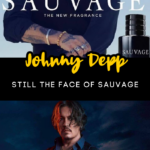 Even amidst Johnny Depp being canceled from Pirates of the Caribbean. Even after he was fired by Warner Bros. and the Fantastic Beasts franchise. He continues to be the face of Christian Dior’s Sauvage fragrance.

The Johnny Depp / Amber Heard saga has been going on for a few years now.

There was that scathing op-ed that Amber wrote for the Washington Post back in 2018. Although it didn’t mention Johnny by name, it was pretty easy to put 2 and 2 together.

That piece was kind of the beginning of the end for Johnny’s public career at that point.

Because of the cancel culture in which we find ourselves living, one bad word from Amber (coupled with his failed libel case against The Sun in 2020), and Johnny’s career pretty much came to a screeching halt.

That is, except for Johnny being the face of Christian Dior’s Sauvage fragrance.

Seriously, have you seen those yummy Johnny Depp Dior ads?

Dior stood behind him when it seemed everyone was abandoning him, and it worked out hella well for them.

It seems that Dior Sauvage fragrance sales took off after he lost that libel trial in 2020.

Johnny Depp is still the face of Sauvage, because Dior aren’t idiots. Be like Dior <3

His die-hard fans stood behind him, and took to Dior Sauvage to show their support.

Well, here we are again. Johnny finds himself in court with Amber Heard. And, guess what. He’s STILL the face of Christian Dior’s Sauvage.

By the time it’s all over, we’re ALL going to smell like Johnny Depp!!

To purchase a bottle of Dior’s Sauvage Eau de Toilette for Men you can check out the Amazon website.