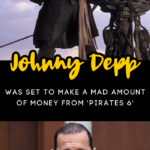 Seriously. Are you watching the Johnny Depp versus Amber Heard trial?

If not, you should pop up some popcorn, grab a drink, and tune in!

I am so addicted.

It’s like watching a trainwreck that you know is about to happen, but you can’t do anything to stop it — and you don’t want to.

But, did you know that, before this circus-of-a-trial, Johnny Depp was supposedly set to make $22.5 MILLION by reprising his role as Jack Sparrow for Pirates of the Caribbean 6?

Now, it’s no secret that I love me some Disney. But, they screwed up here, IMHO.

Based on mere allegations by that crazy narcissistic Amber Heard, Disney canceled the movie right out from under Johnny Depp.

Giving Pirates of the Caribbean the ax cost Johnny his biggest payday yet from the Pirate franchise — $22.5 Million.

[Jack] Whigham said that the $22.5 million fee he says he secured for Depp was only a verbal agreement with Disney and Bruckheimer, but was not written out in a contract.

You may remember that back in 2018, Amber wrote a Washington Post op-ed, hinting that Johnny Depp abused her.

But, was it actually true?

I guess it doesn’t matter. Disney wanted to distance themselves from any drama. As a result, Johnny got the boot.

So much for being innocent until proven guilty, right?!?

Get this: Johnny’s name wasn’t even in the Washington Post op-ed piece!

Amber didn’t refer to him by name, but Johnny said it was obvious that the article was about their messy 2016 divorce.

This op-ed by Amber Heard was like a nail in the coffin for Johnny’s acting career.

With respect to Johnny, it was catastrophic, because it was a first-person account. — It was not from a journalist, it was not from an observer, it was from someone saying, ‘This happened to me.’

As this current trial is making painfully clear, Amber’s allegations were full of crap just a bunch of non-truths. Allegedly, of course.

Not only did Amber’s scathing article cost Johnny Pirates 6, he was also cut from the Warner Bros. Harry Potter spin off franchise.

Warner Bros. ended up recasting his role as Gellert Grindelwald, giving it to Mads Mikkelsen.

No shade to Mikkelsen, but nobody can do a character role justice the way that Johnny Depp can.

So, Johnny lost out on $22.5 Million from Disney, and who knows how much from Warner Bros. All because of the allegations of one woman.

Seriously, if this jury doesn’t side with Depp, and give him his acting career and name back, I will be so pissed.