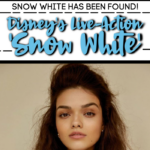 ‘Snow White and the Seven Dwarfs’ was one of my favorite movies as a little girl even though it was released many years before I was ever born.

The original film was released in 1938, and is still loved by people of all ages today!

It has had such a huge amount of success since the beginning, and I bet the live-action version will as well.

According to Deadline, insiders told them that the live-action film will expand upon the story and music from the original cartoon-style film.

There will be new songs for this movie that are currently being written by Justin Paul and Benj Pasek, the geniuses behind The Greatest Showman, La La Land, and Dear Evan Hansen.

As for the cast, so far ‘Snow White’ has been chosen!

Rachel Zegler will be playing the part of ‘Snow White’, you can catch her in the new ‘West Side Story’ film that comes out in December.

In fact, Disney studio brass watched some footage from ‘West Side Story’, and it seems that’s what secured the role for her!

Rachel’s extraordinary vocal abilities are just the beginning of her gifts. Her strength, intelligence and optimism will become an integral part of rediscovering the joy in this classic Disney fairytale.

Production of ‘Snow White’ is expected to start in 2022, I can’t wait, the girl is said to have some pipes and she is stunning!