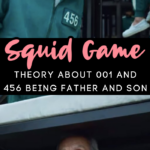 There has not been a day that has gone by lately where I haven’t heard something about Squid Game. I can’t get over how popular it’s become!

Well, there is a popular theory going around now that is kind of blowing my mind. Some are saying that 001, the old man, is the father of 456, Seong Gi-Hun. And I can see why!

In episode 3, 456 starts talking about how he can only drink chocolate milk because regular milk makes him sick. And 001 makes a comment that he must have gotten spanked a lot.

When asked, 456 said, ‘How did you know?”, in which 001 responded that his son did too. Seems like a coincidence, until the marbles game.

Later during the game, 001 asks for the date. When finding out it was the 24th, he states that his son’s birthday is soon. And if you caught this at the beginning of the show, Gi-Hun puts in his birthday as a pin at an ATM, which is the 26th…2 days after the 24th.

What do you think? All coincidences? Or do you think they’re father and son? Let us know in the comments!

Yes he is , calls him “sir”, also agree the neighborhoods seemed the same. I also think 001 may have owned the car company. Spared his life by faking ignorance at marble count.

@Josiah, what is sqid games