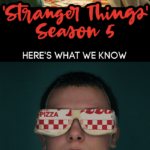 Season 4 of ‘Stranger Things’ was quite a ride, like this was my favorite so far!

It’s hard to believe that we will soon have to say goodbye forever to the cool kids from Hawkins as season 5 is going to be the end of the ‘Stranger Things’ series.

I have read soooo many fan theories, some of them are definite possibilities, but some of them y’all just need to let go of.

Here is everything we know so far about the final season of ‘Stranger Things’.

The biggest question that people want an answer to is when is season 5 of ‘Stranger Things’ going to be released.

Sadly, no one has an answer for that question at this time, however, the Duffer Brothers did tell Variety that the wait shouldn’t be as long this time.

TVLine also reported that Matt Duffer said that they had the storyline “pretty well mapped out” and that writing and filming should start in a few months.

We’re going to take a little vacation in July. And then we’re going to come back. I know that the writer’s room is going to start in that first week of August.

So, we know that writing begins “soon”… we will just have to accept that answer for now.

I know that many of you are hoping that this won’t be the end, but the showrunners have already confirmed that this is indeed the final season of ‘Stranger Things’.

Seven years ago, we planned out the complete story arc for Stranger Things. At the time, we predicted the story would last four to five seasons. It proved too large to tell in four, but — as you’ll soon see for yourself — we are now hurtling toward our finale. Season 4 will be the penultimate season; season 5 will be the last.

From what I can tell, there will be 9 episodes in season 5, they have a lot of ends to tie up in this final season, and at least two of those episodes will be movie-length.

Ross Duffer said that episode 9 is like a long movie that could cover like 2 years of the storyline, I guess we just have to wait and see.