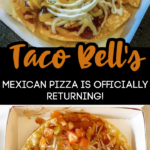 Thanks to the overwhelming outcries from social media, Taco Bell is bringing back their Mexican Pizza!!

YES! The beloved crispy layered pizza stuffed with refried beans and beef, topped with cheese, pizza sauce, and tomatoes is finally coming back!

Now while we don’t know (yet), if the Mexican Pizza is here to stay permanently, confirmation of its return is truly a Christmas miracle.

The Taco Bell Mexican Pizza was originally launched in 1984 and was a staple menu item for decades.

When Did Taco Bell Get Rid of The Mexican Pizza?

In 2020 Taco Bell removed their mexican pizza from menus upsetting customers across the nation. People created a petition in which 166,000 of them signed a petition lobbying for its return!

Is The Taco Bell Mexican Pizza Coming Back?

YES! Thanks to food blogger @markie_devo who confirmed the return on social media, Taco Bell’s Mexican Pizza is returning in the year of 2022.

So When Is the Famous Mexican Pizza Returning to Menus?

Taco Bell’s Mexican Pizza can be expected to return next year in March or April of 2022!

So while there is a little bit of a wait, the anticipation is real am I right?

We’re preparing for long drive-thru lines the day the Mexican Pizza is finally released once again!

I don't care until they bring back the double decker.

@Kai, order a hard rltaco, add a flour shell and beans and tell then to put them in between. Most stores will still do it if it's rung up that way.

Stopped going after they discontinued it, so looking forward to having it and being a regular again!

@Win, I'm the exact way, only they also took away the Shredded Chicken burrito away, too. That and the Mexican Pizza are the only dishes I eat there besides the Dorito Tacos lol

That and tostada were the only things I ate!!!! I had not eaten there since!!!!

I had honestly stopped going since they had dropped this.. went thru the line had them tell me.. "No sorry we don't have that anymore". LIke back when they took the Beef Burrito off the Menu.. WHAT! WHY! So i shall see them again in April

@Mike, they need to put bigger chunks of beef and all there burritos tacos quesadillas everything