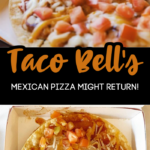 While rumors have surfaced the web and even petitions created to bring back the four piece sliced pizza, the writer behind Living Más, a Taco Bell fan site, has a few things to share about the possible return of the Mexican Pizza.

Living Más who told The Takeout, reported that an anonymous video was sent over showing a franchise convention meeting in September of 2021 deliberating the resurrection of the Mexican Pizza.

While the Taco Bell fan site is keeping the video private, you can read the video transcript for further proof.

Living Más also mentioned to The Takeout that they are “95% sure” the Mexican Pizza will be available once again to order at Taco Bell chains sometime in the first half of next year!

In fact, the video also discloses Mike Grams, vice president and COO at Taco Bell announcing the return of the fan favorite item!

Not to mention, the LivingMás subreddit also shows an anonymous user who’s listed as a Verified Employee of Taco Bell confirmed the rumor of the comeback return and according to the social media user, Taco Bell has a few other returning items and new additions to the value menu.

The double beef burrito, a chicken ranch burrito, and a “Fiesta Veggie” Burrito will be new at Taco Bell.

The return of the Crispy Chicken arrives February; however, the sandwich will most likely be only offered as chicken strips and not made to order as a sandwich, (we don’t make the rules people).

Taco Bell’s wings are also coming back, but only for a couple of weeks.

Finally, there is no set return date for the Mexican Pizza due to supply chain shortages; however, the crispy pizza layered with refried beans and beef, topped with cheese, pizza sauce, and tomatoes could make for a comeback in April or May, while the initial return of the pizza is definitely in the works according to the Reddit user!

Living Más has also pointed out that every piece of Taco Bell intel from the “Verified Employee” reddit user has always come true which means it might truly be, a Christmas miracle.

Please bring back the Taco Salad. My #1 item on their menu. Was very popular and many many people want it back!!!!!!!

Pico would be nice...Aruba's TB knows what's up

Please bring it back.

Haven’t been to Taco Bell since they quit serving this !! Love the Mexican pizza !