In the last few years Santa Claus’ darker half, Krampus, has enjoyed a resurgence in popularity. The delightful half goat, half demon punishes where Santa Claus rewards. But he’s not the only other Christmas time folklore figure that kids can look forward to a visit from this holiday season. 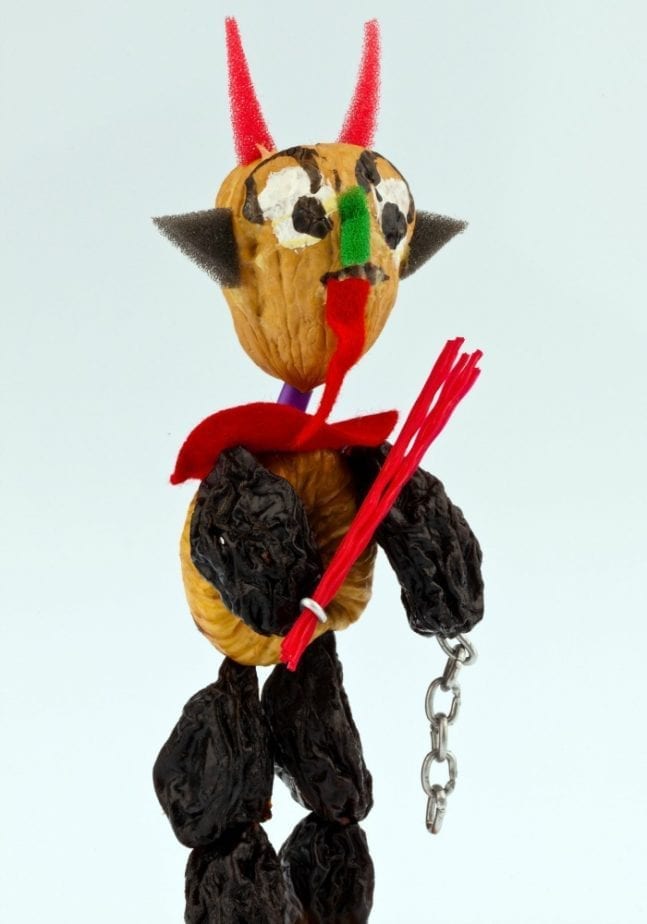 Frau Perchta, The Belly-Slitter, roams the midwinter nights. Along with entourage of ghosts (usually unbaptized souls, sometimes demons,) known as the perchten, she visits homes during the twelve days before Christmas and Epiphany. Her origins are a bit muddy. She is best known as a figure from Austrian and southern Germanic folklore, but versions of her can be found all over Europe. Her name means “Shining One”, so she may have started out as a pagan goddess figure that was later twisted into a hag as Christianity enveloped pagan cultures.

Regardless of her origins, in true medieval style, she is considered the personification of Epiphany AND punishes accordingly.

She is a rewarder of the generous and a punisher of the lazy, the liars, and the greedy. Her primary victims, however, are those who don’t honor work taboos on her feast day. See, Perchta HATES it when folks work on Epiphany. She takes a special interest in spinners.

It was important to Perchta that everyone stop working on her feast day, sit down to a nice meal of fish and gruel, and hang out with the rest of the community. If you didn’t, well….she’d make sure your stomach was full of something, alright. She slits open the bellies of her victims, pulls out their intestines, and fills their guts with garbage. (I may have met Frau Perchta at a Christmas party once.)

Ironically, Perchta also punishes the lazy. So, don’t work on her feast days, but you’d better not be slacking off any other time. Frau Perchta won’t tolerate introverts. You gotta drop your knitting and spend time with the other members of the community on her feast days. Humbugs were not tolerated.

She ESPECIALLY dislikes dishonest children. Those little fibbers would have their lying tongues scraped with glass.

But Perchta isn’t all Belly-Slitting and tongue cutting. If you were a good, she was happy to reward those hard-working souls with a small silver coin.

So, just to clarify, if you failed to meet your spinning quota for the year or worked on her feast day, you got disemboweled and stuffed full of rocks. If you worked hard and did what you were supposed to do you got….like a dime.

The story of the Farmhand perfectly illustrates the capricious nature of Frau Perchta.The owner of the house had a room prepared for Frau Perchta and her entourage of ghosts to stay the night. The farmhand, hearing of Frau Perchta’s beauty and wanting to catch a glimpse of her, he hid in the stove in her room. (How big are old german stoves?!) When Perchta entered the room, she saw the stove she instructed one of her followers to plug the hole in it’s side. His view now blocked, the farmhand was forced to spend the night in the dark. In the morning when Perchta and her ghosts left, he exited the stove and realized that he was blind. The next year he hid in the stove again, and when Perchta entered the room, she ordered her follower to unplug the hole in the stove. The next morning the farmhand’s sight was restored.

So, this Christmas, if you didn’t hear Santa Claus go ‘bump’ in the night, I sure hope you kept on top of your spinning this year…