Of all the things that modern technology has given us – smart phones, space travel, litter boxes that clean themselves, etc. – the best thing by far, in my not-so-humble opinion, is video games. Enjoying a good movie or binge-watched TV series is great and all, but it’s sort of like a football player watching his team play from the sidelines: being a part of the thing itself is way more fun. When it comes to your kids, there’s such a huge variety of games out there to choose from that they don’t have to look very far to find something they’ll like to play. And if what they like is a completely open world with the ability to do basically anything they want, well…that might explain why they like Minecraft so much. 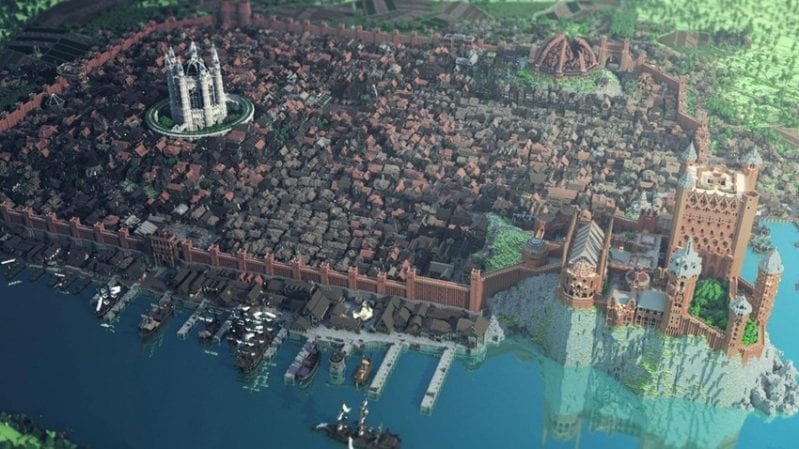 Minecraft is a sandbox game that was first created in 2009 by a guy who goes by the name of Notch, who sold the game to Microsoft a few years later for a truly ridiculous amount of money and is probably laughing at us from a mansion somewhere over our obsession with his blocks. There are three main types of game modes to choose from when you start up the game: Survival, where you battle monsters at varying levels of difficulty while you explore the world in search of bigger and better resources; Creative, where you have access to all the resources in the game without having to find them in the world and can build whatever your heart desires; and Online Multiplayer, where you can play with your friends or strangers in a number of different mini games that other people have created. 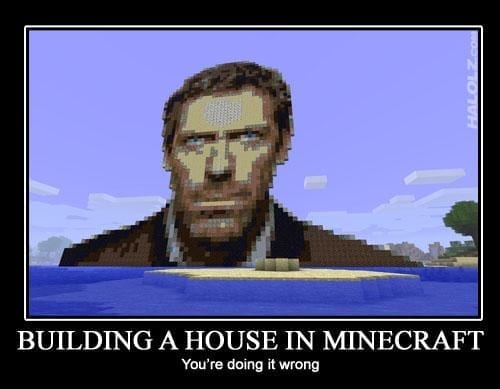 While the Survival and Multiplayer modes offer a ton of great opportunities for fun, the real draw of the game, especially for kids, is the Creative mode. I wasn’t kidding when I said you can build pretty much anything you want – there are almost 150 different types of blocks and items as of the game’s 1.9 update, and almost limitless ways to combine them to create something new. It’s like coloring on steroids; every single thing your kids can imagine can be recreated in Minecraft with a little time and ingenuity. Giant melting ice cream cone? Check. Castle floating in mid air? Got it. Life-size recreations of all the Avengers? Yep. Justin Bieber’s song “Sorry” played on a bunch of note blocks? Yeah, that too…

Top 40 hits aside, probably the best thing about Minecraft is that kids tend to have so much fun playing it that they don’t even realize they’re actually learning things. All of the moving parts in the game are controlled by redstone, a set of items that mimic real-world electrical components. When kids are building a working drawbridge for their epic floating castle, they’re actually learning basic ideas about coding and electrical engineering. Unsurprisingly, people have picked up on these ideas and compiled them into the Minecraft Education Edition, which is specifically meant to be used in STEM learning and features several resources that you can download for your kids.

So really, there’s no need to worry about your kids spending hours exploring and building in a video game or why they enjoy doing it. Because even without focusing on the educational possibilities, Minecraft provides kids with a 3D sandbox that helps them develop the most important skill they’re going to need in their lives: their creativity.

Metaverse explained: What is it, and when will it get here? - USA TODAY - Lazer Mod

[…] As of August, Minecraft boasts more than 140 million monthly active users. During the pandemic, it has exploded in popularity among kids who had to rely more heavily on virtual connections.Some lesser-known companies have launched […]

[…] of August, Minecraft boasts more than 140 million monthly active users. During the pandemic, it has exploded in popularity among kids who had to rely more heavily on virtual […]

Everyone wants to own the metaverse including Facebook and Microsoft. But what exactly is it? – Excel Crypto Currency

[…] As of August, Minecraft boasts more than 140 million monthly active users. During the pandemic, it has exploded in popularity among kids who had to rely more heavily on virtual […]

What is Metaverse? A New Reality Explained 2022 - innoGriti

[…] As of August, Minecraft boasts more than 140 million monthly active users. During the pandemic, it has exploded in popularity among kids who had to rely more heavily on virtual […]

[…] of August, Minecraft boasts more than 140 million monthly active users. During the pandemic, it has exploded in popularity among kids who had to rely more heavily on virtual […]