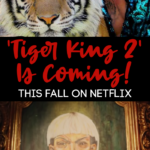 Do we really need a ‘Tiger King’ Season 2?

Well, apparently we do because it’s official that the second installment of the ‘Tiger King’ is headed to Netflix later this year.

Netflix released the news today with the announcement of its upcoming true-crime slate which includes 4 new docuseries and films.

According to the press release, ‘Tiger King 2’ will have “more madness and mayhem”.

‘Tiger King 2’ will be directed by Eric Goode and Rebecca Chaiklin with executive producers Chris Smith and Fisher Stevens.

There isn’t any information on what the timeline of events covered will be in ‘Tiger King 2’, but the announcement footage does show Carole Baskin, Joe Exotic in jail, and Jeff Lowe.

Whether you want to dive into the psyche of a con artist, empathize with the victims of a scam, or piece together the puzzle of an investigation, these wild stories are often full of surprising twists and unusual perspectives.

I have to be honest, I didn’t watch the entire ‘Tiger King’ docuseries, and I doubt I’ll watch this one… I guess it just didn’t grab my attention, although all of the memes and jokes online were hilarious.

Will you be watching ‘Tiger King 2’ this fall on Nextflix?

You can watch the teaser for the upcoming true-crime slate from Netflix below!