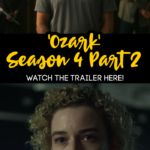 ‘Ozark’ is one of the BEST shows on Netflix and I am so sad it has to end, but all good things do right?

Today Netflix released the trailer for part 2 of season 4 of ‘Ozark’.

This is 2nd part of season 4 will be the final for one of the best series ever made in my opinion and I’m a bit sad.

The first half of season 4 of ‘Ozark’ had seven episodes that were released on January 21st and I need closure!

Netflix has seven more exciting episodes for us in part 2 of season 4.

Of course, Jason Bateman, Lauran Linney, and Julia Garner are all back and I’m truly excited to see what Ruth has in store for us.

I mean, we KNOW she wants revenge and I don’t blame her!

Will anyone else die?

Are Marty, Wendy, and Ruth going to survive the ending?

I have no idea what is going to happen, but it better not end in a disappointing way like the original ‘Dexter’ series because I may just lose my mind!

You can watch the new trailer below and the series will return to Netflix on April 29th, 2022.