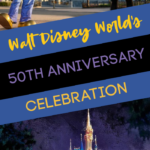 Disney World is about to reach a HUGE milestone!!

They first opened their doors on October 1, 1971, and the rest is history!!

In some ways, I can’t believe it has only been 50 years. I mean, it has been right in Florida my whole entire lifetime, but it seems like something that has just ALWAYS been in existence.

You know they are going to celebrate this milestone in true Disney fashion.

Disney World is going to get an 18-month transformation, beginning on their 50th anniversary — October 1, 2021.

It’s a place and a time to celebrate the small stuff, the big stuff and even the in-between stuff. Because when you celebrate with us, nothing could be more magical.

They will start, of course, with the iconic Cinderella’s Castle in Magic Kingdom, “which will be decorated with ornaments and embellishments for the occasion.”

In Epcot, Spaceship Earth will get its own magic makeover, with “lights (that) shine from within Spaceship Earth’s reflective panels as stardust emerges to symbolize beacons of possibility and optimism.”

Animal Kingdom’s Tree of Life will transform into a glowing symbol of magic and nature, with a light that will appear to come from inside the tree, and magical fireflies to bring us that magical pixie dust feel.

At Disney’s fourth park, Hollywood Studios, the Tower of Terror — A.K.A my favorite ride — is going to glitter “with EARidescence, evoking the glimmer and shimmer of the golden age of imagination and adventure.”

But, the fun isn’t going to stop there!

Mickey and Minnie Mouse are going to get their own special 50th anniversary outfits, that they will don around the parks in celebration.

Our Cast (members) will be making boundless magic across Walt Disney World Resort, ready to create unforgettable memories that last a lifetime.

You can sign up to receive anniversary celebration details just as soon as they become available.

All you have to do is go give them your info HERE.

So, to sum up, I am going straight to the Disney World website to book my 50th anniversary celebration tickets, and I highly suggest you do the same!!