What Was Kim Kardashian’s Met Gala Outfit All About?

Last night was the Met Gala which is an annual fundraising gala for the benefit of the Metropolitan Museum of Art’s Costume Institute in New York City and celebrities everywhere show up to show off costumes.

Well, Kim Kardashian was basically like – hold my beer because she showed up wearing this:

Strange, right? I mean, if it wasn’t for those curves, we’d probably never know it was her.

In fact, I am pretty sure this is Kim and Kanye together (his stance gives it away) but I could entirely be wrong.

People truly went wild over this look and lots of memes came out of it:

But all jokes aside, what exactly does her outfit mean? If you know anything about The Kardashians, they don’t do anything by accident. Everything is planned including this outfit.

Well, according to many fans, Kendall wore a see-through dress while Kim wore a entire black outfit to show the difference between Western fashion worlds and the Islamic oppression of women, forcing them to wear black from head to toe.

While we aren’t sure that is exactly what is happening here, that entirely makes sense and makes a strong statement.

So, what do you think about Kim’s Met Gala outfit choice? 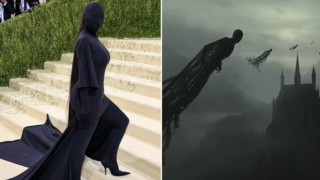 Next
People Are Saying Kim Kardashian's Outfit Made Her Look Like A Dementor from Harry Potter
Click here to cancel reply.