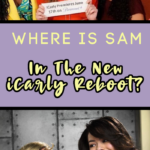 The iCarly gang is all grown up!

Spencer and Carly Shay, Freddie Benson, and even Nevel including Freddie’s mom are back on set!

Since the original announcement of the iCarly was show coming back to television, the long awaited trailer is finally here and it’s like walking down memory lane.

The Nickelodeon show that first debuted in 2007 revolved around three best friends (Carly, Sam, and Freddie) who created a popular web show that exposed the three high school students in funny antics and some super cool adventures.

Now, the updated version of iCarly while still featuring a few familiar faces is missing Carly’s best friend Sam from school, who will be revisited briefly later on in the season.

In an interview with Entertainment Tonight, Miranda Cosgrove says that Carly’s character “still loves Sam and always will” while in real life, the crew had hoped Sam would return but are happy for Jennette McCurdy being successful doing other things.

In the same interview, Jerry and Miranda briefly explain that Sam’s character will be mentioned in the pilot episode, but will not focus too much attention on the character out of respect for Jennette.