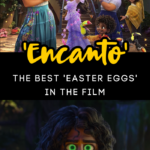 The internet is obsessed, my family is obsessed, and Encanto seems to be the only thing that anyone is talking about.

There are about to be HUGE spoilers ahead, so if you haven’t yet seen Encanto, log onto Disney+ and get to streaming!

What Is Encanto About?

So, the basic storyline is that there is this family who has received a miracle (an Encanto). Each child and grandchild in the family receives a different “gift” when they come of age (whatever that means).

They get their own special room in the house (known as Casita), and they use their special power to help the family and the surrounding city.

Everyone has received a gift when it is time except Mirabel. When it was her turn to receive the gift, the magical door disappeared.

Mirabel strives hard to be accepted by her family — which all have powers but her — but she always seems to fall short.

When it is little Antonio’s day to get his power, Mirabel starts to see cracks appear in Casito. If these cracks reach the candle in the window, the family may lose their miracle and the powers that come with it.

It is up to Mirabel to find out what is happening, and what is threatening the magic.

What Is The Music In Encanto?

Oh my gosh. This film has the BEST soundtrack. We have it playing on repeat in our house — which the kids now refer to as Casita — and we know all the words to all the songs.

In fact, I’m listening to “What Else Can I Do?” right now as I write this. LOL!

I think EVERYONE can relate to at least one of the songs from the Encanto soundtrack.

For me, it’s all about “Surface Pressure,” but that’s because I’m the oldest of my siblings, and I feel her pain in my soul.

Fun fact, Lin-Manuel Miranda, the genius behind Hamilton and Moana, wrote the songs for Encanto!

If you have Amazon Prime Music, you can listen to the entire Encanto soundtrack. But be forewarned, you will get all the songs in your head for days!!

Are There Any ‘Easter Eggs’ In Encanto?

First of all, do you know what an Easter Egg is in a film?

It’s basically a hidden feature of the movie that you might miss if you blink. Easter Eggs are hidden in plain sight, and super fun to find.

Encanto has some GREAT Easter Eggs that you probably missed while watching the film. Once you know what they are, it is exciting to see them play out in real time during the movie.

(Like this nod to Titanic with the three orchestra players playing as the ship goes down.)

What Are The ‘Easter Eggs’ In Encanto?

Sit tight, I’m going to tell you all the Easter Eggs that I found exciting in Encanto.

Isabela’s dress is made to look like bouquets of flower petals. There are also orchids on her neckline. This is a reference to the national flower of Columbia.

Louisa’s skirt has embroidered weights along the bottom edge, a symbol of her strength.

Bruno’s cloak has hour glasses embroidered into the fabric. This can represent how he sees into the future.

Camilo’s outfit has pictures of chameleons on it, because he can camouflage into anyone.

Pepa is always seen wearing a pair of sun earrings, and her bright yellow dress has raindrops on it. Remember, she can affect the weather.

Julieta’s dress has a mortar and pestle on the front of it, and herbs all over it. A nod to her baking.

In the posters, Antonio can be seen wearing a vest which has animals embroidered on it.

On Dolores’ dress you can see sound waves, because she can “hear a pin drop.”

Agustín wears a pair of mismatched socks that have a special meaning. One has weights on it for Louisa, the other is embroidered to look like Mirabel’s dress. He also wears a flower on his lapel for Isabel.

Mirabel loves her family, and it shows by the clothes that she wears. Her skirt is embroidered to match all the key players in the family.

A candle can be seen for Abuela, a rainbow and cloud is on there for Pepa, the embroidered flowers represent Isabella, there are weights for Luisa, a chameleon for Camilo, and animals for Antonio.

One of the guests coming into Casita for Antonio’s ceremony is styled similarly to Mama Coco from Coco. She is an older woman with grey hair styled in braids. Her clothing is different colors but in the same fashion as Mama Coco.

There are butterflies on the wallpaper in the nursery.

There is a butterfly on Mirabel’s shirt

Abuela has a chain that she wears on her waist. The chain contains a clock and a key, but it is fastened to her outfit by — you guessed it — a butterfly.

In both films, Bruno is the name of something unwanted.

And, I have saved perhaps my FAVORITE Easter Egg in the entire film for last.

This is by no means an exhaustive list. There are hints, nods, and hidden things in almost every scene!

Do you know some Easter Eggs that we missed? Let us know below.