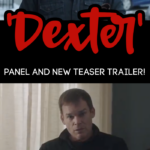 If you’re a regular reader here, you’ll most likely know that I am obsessed with ‘Dexter’.

I don’t even watch that much television but I have probably watched this series more times than any other person, I’m not even exaggerating.

They just dropped a new teaser and I am super excited for this new season to come out so I can feel better.

If you have watched the ‘Dexter’ series, then you know that the ending was not what we wanted.

Michael C. Hall just did a Comic-Con@Home panel to promote the 10 episode revival of the show and he even hinted at some things that are coming.

Going back to the way the show ended, I think we see Dexter having made a choice to go into a self-imposed exile, and I think he’s doing a very, very long, protracted penance for the people who have died, who were close to him and not intended victims, because of how he had been living, how he perhaps was playing it fast and loose with the code.

And I think as far as abstinence goes, as I imagine it, I think Dexter is maybe exercising the power of his restraint, that his ability to not do it is something he fixates on as a new kind of power. It’s the only way I can imagine him living without killing, if in fact he hasn’t been killing.

In this new teaser, Dexter is living a new life using the name Jim Lindsay and seems to be speaking to a counselor or maybe a therapist?

Well, it’s been a whirlwind. I’ve always had my demons, and so I went away. But sometimes I have an urge too strong to ignore. Every day I walk through this world faking it, knowing if someone knows who I am, that’s it.

Dexter says in the trailer

It’s been 10 years since the end of the last season and way too long in my opinion, however, I am just grateful at this point that it’s happening!

There have been so many rumors over the years, but Michael C. Hall repeatedly squashed them, and just to know that this is really happening is just amazing!

Watch the new teaser below, it will play after the panel at about 48 minutes in!