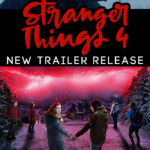 Netflix just revealed it’s most recent trailer and it’s getting me SO amped up for this show!

This season will take the group to Creel House, which is both awesome and terrifying! If you aren’t familiar with the location, it’s the house that used to belong to Victor Creel.

Creel was characterized as a disturbed man who was imprisoned in a psychiatric hospital for a gruesome murder in the 1950s.

We will also figure out the fate for Hopper, which we have been sitting on that cliffhanger for a looooong time!

Because of the pandemic, we are still waiting on the release, which is now set for 2022, but at least we are being given another sneak peek of the future!