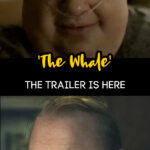 He got a whopping 6-minute standing ovation for his performance at the 79th Venice International Film Festival, and we are FINALLY getting our first look at Brendan Fraser in The Whale.

This film shows Brendan Fraser’s rock solid performance as a 600-pound, gay, reclusive English teacher who is trying to reconcile with his estranged teenage daughter (Sadie Sink from Stranger Things) while coming to terms with his severe obesity.

The trailer is only a minute long, and doesn’t give much away, but you can tell it’s going to tug at all the heart feels.

Y’all, it looks so good, and I can’t freaking wait to finally see Brendan again on the big screen!

We are obviously in for quite an emotional ride, and you better pack that Kleenex in your purse.

Do you ever get the feeling people are incapable of not caring? People are amazing.

The #Brenaissance of Brendan Fraser is happening, and I couldn’t be happier for the guy!

He has overcome so much — a sexual assault allegation, a Hollywood blackballing, a hard divorce, money problems, chronic pain, and having to deal with people constantly commenting about his physical change in appearance through the years.

I hope The Whale is only the beginning of our new-found — re-found — love affair with Brendan Fraser.

You can catch Brendan Fraser in the trailer for The Whale below.