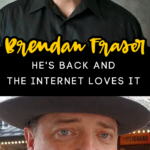 On social media, it seems like nobody can ever get along. It can be passive aggressive, nasty, mean, and sometimes there can be downright bullying. There are times that I just want to shut off my computer and take an internet hiatus.

Nobody can ever agree on a thing — until now. Brendan Fraser is back, and we are ALL defending those naysayers who dare talk smack about our guy!

The year was 1992. (I know, some of you weren’t even alive yet!) I sat in a dark movie theater with some friends who wanted to see this new film that, to me, looked like it was going to be awful. It starred that bizarre MTV VJ, Pauly Shore, and that guy from The Goonies. It was something about a caveman. I was not expecting much.

I was slumped down in my movie theater seat, eating fists full of popcorn, slurping up coke, and pouting that we had to waste money on this lame film.

Then, he showed up on the big screen — half naked and dirty as hell — Brendan Fraser. I instantly fell in love.

Those gorgeous, wide blue eyes that seem to pierce right through to my heart. Those lashes that seemed to go on for days. That tall physique that had just the right amount of muscles to be totally sexy. And, dude could dance. HOT.

I was immediately obsessed, as was the rest of the world, and became a die-hard fan of every single movie he put out.

If you haven’t seen Blast From The Past, you are not living your best life right now.

Then 2003 happened, and it seemed like Brendan Fraser pretty much disappeared off the face of the earth.

One look at his IMDB page shows that he has, indeed, been a working actor, but you never hear his name anymore.

See in 2003, he accused the president of the Hollywood Foreign Press Association, Philip Berk, of sexual assault, and that seemed to be the beginning of the end for our favorite Encino caveman.

In 2018, Brendan gave an interview to GQ magazine that explains why he disappeared from the limelight, and it’s kind of a tough read. He has been through a lot.

It started with the 2003 sexaul assault charge, which led to a major spiral into depression. He got turned down for roles, which was a major hit to his self-worth, which led to more depression. There were many surgeries where they had to repair his body because of something he’d messed up while doing his own stunts. He had some hard family years, and then it culminated with the loss of his mother due to cancer in 2016.

Dude had some hard years. Give him a break.

He may not be that young, wide-eyed youngster who hit it big in the 90’s, but he’s still our Brendan Fraser, and the internet still loves him.

In a time when people can be nasty and cruel, the internet is praising him for making a comeback, and I’m here for it!!

We are soon going to be able to catch him alongside the likes of Leonardo DiCaprio and Robert De Niro in Martin Scorsese’s new film, Killers Of The Flower Moon.

And, he isn’t going to be just another face in the back of the crowd. He is going to be front-and-center, and I can’t wait!

He may be a little older, a little wiser, and the years may show just a little bit. But, he’s still our Brendan Fraser, and the internet loves him!