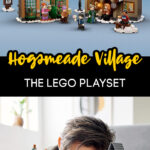 If I could visit one imaginary city in real life, it would be the wizarding city next to Hogwarts, Hogsmeade Village.

I mean, doesn’t it sound totally enchanting — literally a quaint little village right out of a book.

Hogsmeade looked like a Christmas card; the little thatched cottages and shops were all covered in a layer of crisp snow; there were holly wreaths on the doors and strings of enchanted candles hanging in the trees

Now, thanks to LEGO, you can build your own little Hogsmeade Village, and it looks wicked cool!

With this set, you can build the 2 most famous buildings in Hogsmeade Village: Honeydukes Candy Store and The Three Broomsticks Pub.

Both places I secretly wish I could hop on a train and visit.

Now, the buildings are super cool by themselves, but you also get little figures in this Harry Potter LEGO set.

The finished play village measures over 8.5 inches high by 11.5 inches wide by 3.5 inches deep. Just perfect to set up and display along with your favorite Harry Potter memorabilia.

Or, I’m not here to judge, you can do a little role play with the Hogsmeade Village and the Harry Potter figurines.

I might even play along if you asked me nicely. LOL!

You can get this Hogsmeade Village LEGO playset for about 77 bucks, and that Harry Potter fan in your life is going to LOVE it!

To grab your own Hogsmeade Village LEGO playset, you simply need to hit up the Amazon website.

When you are done building Hogsmeade Village from the world of Harry Potter, you HAVE to check out The Office LEGO playset. It even comes with a little stapler in Jello! LOL!