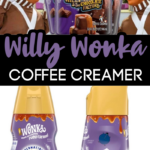 Willy Wonka is taking a step away from his factory and instead, has decided to dabble in the coffee creamer industry considering International Delight and Willy Wonka and The Chocolate Factory have just partnered together.

Similar to his funky name, the name of this creamer is literally, a mouthful.

Dubbed the Wonka Whipple Scrumptious Fudgy Caramel Creamer, this creamer is made for those who have a major sweet tooth, or two.

Of course Mr. Wonka himself knows his way around sweets considering his factory had a running chocolate fountain and grass that was edible.

The back of the creamer bottle replaces the chocolate bar in the film for a chance to win a golden ticket which in return, will win you a grand prize of a years supply of coffee creamer.

The hunt for the golden ticket on the back of the creamer begins this December so we can expect the newly flavored coffee creamer to be stocked on store shelves soon.

I have absolutely gotta try this when it comes out

Hopefully they will make it sugar free also!

It looks DELICIOUS...but it's to sweet for me. I'm a diabetic. If they had a suger free one, I would absolutely try it.

@Liz L., Picked mine up today. The do have a sugar free version also.