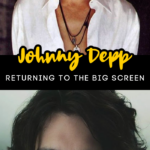 Johnny Depp is returning to the big screen, even amidst the Amber Heard drama.

His work problems began with the op-ed piece Amber wrote for The Washington Post. Although she didn’t mention him by name, it was rather obvious who she was writing about.

Then in 2020 Johnny lost a libel case against The Sun. They had called him a “wife beater” in one of their articles, and an insane jury sided with The Sun in the case.

This string of events lead to Johnny being released by Disney. He would no longer be Captain Jack Sparrow, a character that he had built up over about 20 years.

Not only was he canceled by Disney, Warner Bros. dumped him from the Fantastic Beasts franchise. He had played the dark wizard, Gellert Grindelwald, but was then replaced by Mads Mikkelsen.

Hollywood had blacklisted him, and much to the chagrin of all his fans, he couldn’t find work on the big screen.

That is about to change, however.

Maybe Hollywood has turned their backs on Johnny, but overseas, they are not as swayed by the word of one lying woman.

According to Variety, Johnny will be taking on the role of French king Louis XV in a new French film directed by Maiwenn.

Get this — he gets to spend 3 months this summer on location at the Versailles Palace and other famous french landmarks. Not too bad after enduring this circus-of-a-trial that is currently going on in the States.

Unless they decide to make the film in English — which is highly unlikely — Johnny will get to break out his French once again for the role.

He lived in France for many years with his wife, Vanessa Paradis, and daughter, Lily Rose. So, he can probably make his way through a French film pretty easily.

Am I the only one that would LOVE to hear him speaking in French? Oh lala!!

But, we know a bit about the Louis XV history. There is SO much that this film could focus on, but one thing’s for sure: Johnny is one of the BEST character actors out there, and this film is going to be awesome!

Louis XV, who was nicknamed “the beloved” and reigned for 59 years, the longest in the history of France after that of Louis XIV. Paradoxically, Louis XV died as an unpopular king after being accused of corruption and debauchery.

Hopefully Johnny will be able to put this whole Amber Heard drama behind him, and enjoy the film shoot.