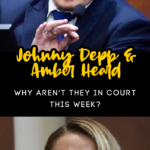 What in the world am I going to do with all my free time this week?!?

Johnny Depp and Amber Heard aren’t going at it in court this week. That means so many of us are going to be left staring blankly at our computers, feeling a little lost. What do we watch now?!?

Our social media news feeds are going to go back to being filled with boring things. I guess we get to hear more about what’s going on with Kim K, the war, celebrity babies, and the like.

Why aren’t Johnny Depp and Amber Heard in court this week?

The circus show trial is only on hold for a week. Much to everyone’s delight, the show is back on Monday, May 16.

What does this week-long hiatus mean for Johnny Depp and Amber Heard?

Johnny has already had his time on the stand. He gave some pretty explosive testimony, and hopefully the jurors don’t forget his side of the story during this week.

Time can be detrimental to this case.

Amber Heard is smack in the middle of the acting experience of her life testifying. She will return to the stand when court starts back up.

What’s bad for Amber — but so good for us lurkers — is that she is about to experience cross examination by Johnny Depp’s Lawyers.

The upcoming cross examination from Mr. Depp’s team will be most telling, and will certainly highlight the many fallacies Ms. Heard has now attempted to pass off as fact throughout her convoluted testimony.

A Statement By A Spokesperson For Johnny Depp

What is this Johnny Depp versus Amber Heard trial about?

In case you have been living under a rock, let me catch you up to speed.

Back in 2018, Amber Heard wrote a scathing op-ed piece for The Washington Post.

Now, it didn’t mention Johnny Depp by name, but everyone could put the pieces of the puzzle together.

As a result of this op-ed article, Johnny’s life has been turned upside down.

His name was drug through the mud. He was pretty much blacklisted from all his projects, losing millions of potential dollars.

He was fired by Warner Bros, which means they recast his role in Fantastic Beasts. He is no longer the dark wizard Gellert Grindelwald.

But, the biggest upset is that Disney fired him from The Pirates of the Caribbean franchise. That’s right, he will longer play Captain Jack Sparrow.

Side Note: He will ALWAYS be Captain Jack Sparrow in my heart.

After nearly 20 years of playing Jack Sparrow, Disney fired him on the word of one crazy woman.

So, Johnny is suing Amber in this defamation trial. He wants his name and reputation back — and a bit of money, too.

Who will be watching when the trial resumes on the 16th? That’s two arms raised up high for me!!