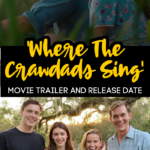 Back in 2020, we told you that Reese Witherspoon was going to be turning the best-selling book ‘Where The Crawdads Sing’ into a movie!

Well, filming has officially wrapped on the movie and I’m excited to tell you everything we know!

So many people recommended ‘Where the Crawdads Sing’ to read and they were right, it was such a great book!

This isn’t the first time that Reese Witherspoon has taken a book to film! She also did the same with Big Little Lies on HBO, and Little Fires Everywhere on Hulu.

There is so much to her story: romance, mystery, and a murder… and it takes place in the breathtaking backdrop of the South. I didn’t want this story to end!

If you haven’t read the book, this is the rundown I have on the story and what I know so far about the movie:

The story follows two timelines. One is about a Kya Clark, “Marsh Girl”, she is sort of an outcast and growing up in the swamp after being abandoned by her family.

Here is the cast for ‘Where The Crawdads Sing’:

Filming actually started in April 2021 and was wrapped by July of 2021!

The film is expected to release in theaters this summer, on July 22nd, 2022 and I am so excited!

Check out the trailer below and let me know what you think in the comments!