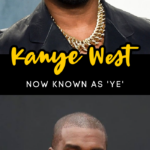 He has been through so much lately. A divorce, a failed bid at presidency, the awkward delay of his album Donda, some beef between Drake and himself — I’m sure there’s more.

But, now he is moving into the next phase of his life, and it calls for a big change.

Kanye has officially filed a request with the courts to change his name from Kanye Omari West to just “Ye.”

He’s gone by a lot of different names over the years, but he is making this one official.

The reason for his sudden name change isn’t very clear. He cited “personal reasons” among the paperwork he filed to change his name.

I mean, it’s really his business. If he wants to change his name, I’m not here to stop him.

I believe ‘ye’ is the most commonly used word in the Bible, and in the Bible it means ‘you. So I’m you, I’m us, it’s us. It went from Kanye, which means the only one, to just Ye — just being a reflection of our good, our bad, our confused, everything.

Kanye West in an interview about his album Ye

There is no word on when this name change goes into effect. Do we start calling him Ye right now?

Ye’s next Donda album listening party is scheduled for August 26th at Soldier Field stadium in Chicago. The album is supposed to drop after this event, but we will see what happens.

Congratulations on the name change, Ye. I hope this new phase in your life makes you truly happy.