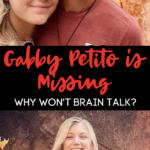 I need to start this off by saying that I feel so many emotions over this and I am extremely sad for Gabby’s family.

Some of you may have read about my friend Susie, she and her son Evan have been “missing” for several years, we all know what happened and know they are no longer living.

It is so freaking hard to know this and see him continue on with life as though nothing happened… so I do know how this feels for this family and I hope they get justice.

Gabby Petito is a 22-year-old woman that has been missing, and there is so much sketchiness concerning her boyfriend.

Both local and federal authorities have been searching for her after she was reported missing by her family.

Gabby had been traveling with her boyfriend, Brian Laundrie, the thing is… he came back home to the home they shared together in North Port, Florida, but without Gabby.

Police say he is refusing to talk to authorities even though Gabby’s family, as well as attorneys, have tried to get information from Brian and his family with no help from them.

Statement from an attorney for the Laundrie family

Here is what we know so far about the case

Back in June of this year, Gabby and Brain went on a cross-country trip in Gabby’s white Ford van.

The plan was to travel to the West Coast, through national parks across the Western United States, all the while sharing her journey on social media.

She maintained regular contact with her family members during her travels, however that communication abruptly stopped around the end of August,

Then communication just stopped a lot like with my friend Susie.

On August 12th in Moab, Utah, the police have bodycam footage of an incident involving the couple.

Apparently, they had gotten into a physical and verbal altercation, but both had said they didn’t want to charge the other with any type of crime.

Both the male and female reported they are in love and engaged to be married and desperately didn’t wish to see anyone charged with a crime.

So the police suggested that they separate for the night and no charges were filed and the police report describes Gabby as “confused and emotional”.

After evaluating the totality of the circumstances, I do not believe the situation escalated to the level of a domestic assault as much as that of a mental health crisis.

Gabby’s family reported to the police that the last contact they had had with her was during the last week of August, before their last communication, it’s believed the couple had been in Grand Teton National Park in Wyoming.

Richard Stafford, the family attorney, said the date of the last communication was August 30th, but that they do not believe that the message was from Gabby.

The message received on August 30th has not been shared with the public and we do not know what made them think it was not her that sent the message.

Brain came back to the home they shared with his parents in North Port on September 1, according to police.

The police said that Brian Laundrie returned home alone to Florida with the van they had been traveling in 10 days before Gabby was reported missing by her family in New York.

Gabby’s Family reports her as missing

On September 11, 2021, Gabby’s family, who lives in New York, reported her missing to the Suffolk County, New York, Police Department since they could not get ahold of her any longer.

North Port authorities went to the home Gabby shared with Brian and his family on Saturday night asking to speak to him and his family.

We were essentially handed the information for their attorney. That is the extent of our conversation with them.

Shady shady shady, why wouldn’t you want to help locate your missing “fiance”?

Everyday the search for Gabby continues the Schmidt and Petito family becomes more desperate. They are frantically searching for answers and information in their daughter’s disappearance while Brian sits in the comfort of his home.

The police recovered the white van from the home and said that “there was some material in there” and they would be going through them.

The Petito family pleads for help

Stafford, the Petito family attorney, read a letter from Gabby’s family on September 16th during a police news briefing.

Please, if you or your family have any decency left, please, tell us where Gabby is located. Tell us if we are even looking in the right place. All we want is for Gabby to come home. Please help us make that happen. We haven’t been able to sleep or eat, and our lives are falling apart.

Gabby Petito’s family had reached out to Brian’s family earlier in the month for information on where Gabby was, but the Laundrie family refused to answer any questions.

Florida police have declared her boyfriend, Brian Laundrie, a person of interest in her disappearance.

Gabby is a White female that stands about 5 feet, 5 inches tall and weighs around 110 pounds

She has blonde hair, blue eyes, and has several tattoos, one of which is on her finger and one on her forearm that says, “Let it be.”

The FBI has set up a national hotline for tips, so if you know anything please call 1-800-CALLFBI (225-5324), something small even could be really important to help find out what happened to Gabby.

Is this linked to the couple killed in Moab?

Police are actually comparing notes on Gabby’s disappearance with the case of the 2 murdered women found in Moab, Utah last month.

They haven’t ruled out a connection, which takes this case down a whole different road…

The women that were murdered were a couple that had plans to get married soon, Kylen Schulte was 24 years old, and Crystal Turner was 38 years old.

The couple was found shot to death in a creek near where they had been camping on August 18th.

The women were last spotted on August 13th in Moab at Woody’s Tavern and were reported missing on August 16th.

Kylen had told her friends that there was a creepy man hanging out around their campsite, located in the South Mesa area of the La Sal Mountains near La Sal Loop Road.

As of right now, there is no evidence that the cases are connected, but it hasn’t been ruled out either.