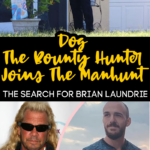 Yes, you read that correctly, Dog The Bounty Hunter has now joined the manhunt for Brian Laundrie and was spotted knocking on the front door at the Laundrie’s family home yesterday.

I don’t know if I’m behind the times, but it’s been a minute since I have heard anything about the television famous bounty hunter.

Brian Laundrie had an arrest warrant issued and is the number one suspect in the murder of Gabby Petito.

Now you have nearly every internet true crime junkie as well as Dog The Bounty Hunter trying to locate Brian Laundrie who has been missing for weeks now.

When Dog went up to the door of the Laundrie home, it doesn’t look like they were willing to speak to the infamous bounty hunter, which isn’t shocking because they haven’t been helpful to authorities at all during this time.

They even delayed reporting their son missing, which is super shady and makes it look like they helped him to escape the area.

Brian’s parents even went to the area that he supposedly went hiking, notices his car… left it there, and then went back the following day to retrieve the car and bring it home, all without notifying the police.

The rep for Dog the Bounty Hunter told TMZ that Dog is there to help bring justice to the Petito family, and feels compelled to get out there and do what he does best, which is capturing people and bringing them to the authorities.

TMZ reported that Dog is there volunteering his services at this time and had not made any contact with those in charge of overseeing this case.

I’m happy to see so many working to help bring Brian in, I would love to see this energy given to other cases as well, including the case of my friend Susan Osborne and Evan Chartrand.

Some people are angry that this case has gotten so much attention but for me, it is an inspiration to push harder on the forgotten cases, such as the case of my friend.

Dog the bounty hunter at the house https://t.co/C4o7kSmc4m