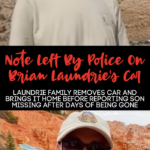 Where is Brian Laundrie and how on earth can his family be so helpful in helping him hide?

If Brian isn’t guilty, then why wasn’t he cooperating?

Supposedly Brian went on a hike at the Carlton Reserve in Sarasota, Florida… only he didn’t return from the “hike”.

The Laundrie family’s attorney, Steven Bertolino told the media that the family had gone looking for Brian on Wednesday and instead found his Ford Mustang and it had a note from the police left on it.

Steven Bertolino said that the note stated that the car needed to be removed from the area.

Brian’s family say they left the car on Wednesday “so he could drive it back,” Bertolino said in a statement to ABC7.

When Brian didn’t return home, the Laundrie family went back to Carlton Reserve on Thursday and retrieved the car to bring it home.

It seems like a normal response would have been to call the police to come to investigate instead of removing what could be evidence.

It wasn’t until Friday that the Laundrie family filed a missing person report on Brian, and that’s pretty freaking shady considering all that has happened.

The North Port Police Department has searched the Carlton Reserve and has had no luck in finding Brian.

The entire thing makes me sick and the fact that the family is helping Brian hide out instead of seeking the truth is just not right, especially after Gabby’s body had been recovered.

he's on his way to calif where criminals go free. everyone stop voting democrat. destroying america. stupid people quit breeding! destroying the world. laundries are democrats. probably petitos too. they should have allowed them to date. all 4 parents unfit. gabbys dad looks like brian. he was likely bad dad, thats why gabby chose brian.

@ZXv, typo SHOULDNT have allowed them to date