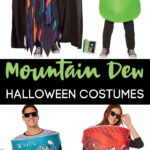 If you’re stuck on a costume this year for Halloween, Mountain Dew has your back.

Inspired the carbonated soda, the Dew and Spirit Halloween have teamed to create a collection summoned by the sugary beverage.

That’s right, you can literally dress as the green soda bottle at this year’s Halloween costume party if you wish!

Featuring three Mountain Dew flavors including the original Mountain Dew bottle dressed in neon green, the Baja Blast can decorated in blue, and the Code Red can costume, all of which are inflatables.

And let’s not forget about the infamous Grim Reaper, I mean the VOO-DEW Grim, which is the Dew’s famous mystery flavor that leaves us all guessing the different flavors every year during spooky season.

“MTN DEW, like Spirit Halloween, has some of the most fanatic followers of any brand in the U.S. and we are thrilled to team up with them to introduce the first-ever officially licensed MTN DEW Halloween costumes,” said Kym Sarkos, Executive Vice President at Spirit Halloween in a recent press release. “Whether you’re dressing up as one of your favorite DEW flavors or going all in as the VOO-DEW Grim, these limited-edition costumes are sure to turn heads this Halloween season.”

So whether you’re adding Code Red to your shopping list or the VOO-DEW Grim to your credit card bill, you can snag the costume lineup early starting September 1, but you won’t need to run to get a costume!

Sold exclusively online at SpiritHalloween.com nationwide, you can shop the soda bottles and cans right on your couch.