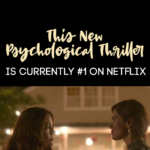 Another psychological thriller has been added to Netflix and this time, its hit the ground running.

After being released only 48 hours on the streaming platform, the show has managed to gain the #1 in the top ten shows currently.

Scooting over other shows such High Heat and even Stranger Things, the new thriller has everyone watching it after dinner.

P.S. put the kids to bed for this one!

This is an Australian psychological thriller that revolves around two twins named Leni and Gina.

The two have secretly swapped lives since childhood, although their lie starts to unravel when one of the twins goes missing.

The storyline is basically the Parent Trap with a twist, starring Michelle Monaghan, Matt Bomer, Karen Robinson, and Daniel Sunjata.

The official synopsis is:

Echoes is a mystery thriller about two identical twins, Leni and Gina, who share a dangerous secret. Since they were children, Leni and Gina have secretly swapped lives, culminating in a double life as adults: they share two homes, two husbands, and a child but everything in their perfectly choreographed world is thrown into disarray when one of the sisters goes missing.

So far, there is only 1 season but all seven episodes are currently streaming on Netflix!

The new show dubbed Echoes is a must-watch especially if you like horror movies.

Oh, and you can watch the trailer down below to see if the show peaks your interest even though we have a feeling, it already has!