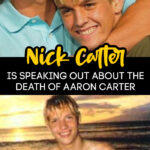 We got the sad news yesterday. Aaron Carter passed away at the way-too-young age of 34.

Nick took to Instagram to say goodbye to the younger Carter brother, and it has us all tearing up just a little bit.

My heart is broken. Even though my brother and I have had a complicated relationship, my love for him has never ever faded.

I have always held on to the hope that he would somehow, someday want to walk a healthy path and eventually find the help that he so desperately needed.

Sometimes we want to blame someone or something for a loss, but the truth is that addiction and mental illness is the real villain here.

I will miss my brother more than anyone will ever know. I love you Chizz. Now you can finally have the peace you could never find here on earth….I love you baby brother.

People are flooding the comments of Nick’s Instagram posts with condolences for the family.

There has been no official cause of death announced, but from Nick’s post it can be assumed that Aaron’s mental health struggles were at play.

If you aren’t aware, the history between the two brothers has been rocky at best.

According to ET Online, at one point, Nick even had to go as far as filing a restraining order against his younger brother.

The entire situation is just devastating, and our thoughts and hearts go out to the family.