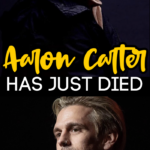 Another iconic singer has passed away too young.

Singer Aaron Carter who is brother to Nick Carter, a member of the Backstreet Boys has recently passed away earlier today.

According to multiple sources who told TMZ, Aaaron was found dead in his home in Lancaster, CA.

His house sitter found Aaron’s body laying in the bathtub, according to The Los Angeles County Sheriff’s Department who also told TMZ.

Law enforcement sources have also told TMZ that a 911 phone call was made Saturday morning at 11 regarding a male who had drowned in the bathtub.

It is standard procedure for homicide detectives to investigate such death scenes and currently, there has been no evidence of foul play according to law enforcement sources who told TMZ.

Aaron who raise to fame in the late 90s, released his first album when he just 9 years old; he was also a regular on Nickelodeon and even toured with the Backstreet Boys.

Aaron was only 34 when he passed today; rest in peace.