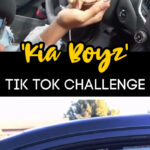 For the love. Can we stop with the awful TikTok trends and challenges, already?

From the Orbeez Challenge, to the Nyquil Chicken trend, all the way to the Smack A Teacher On The Backside Challenge, people keep coming up with more stupid and asinine ways to prove that some people are sheep — just blindly and ridiculously following ignorant trends.

Now there’s a new trend, and it involves stealing cars.

Y’all. I can’t even — why do some people think this sounds like it might be a good idea?

There is a new challenge called “Kia Boyz” that demonstrates how USB charging cords can be used to start up cars that don’t have those push-start buttons.

Doesn’t this set off red flags for anyone else? Like, jail time could be involved here?

According to Yahoo, this trend is particularly dangerous if you own a Kia and Hyundai.

These “Kia Boyz” challenge videos demonstrates in detail how to break off the dash panels under car steering wheels and then use USB cords to start the cars and then take off.

Not only do they take off in the stolen car, they then film themselves recklessly joyriding and then crashing or dumping the car.

You got insurance. — [If not] you should.

Now, some police are saying, to help prevent theft, people should use a device that locks the steering wheel. But, y’all. There are videos that show this device just taken off and thrown on the passenger’s seat.

Pretty much, the best way to deter these juvenile car thieves is to lock your car. Sure, this won’t stop them all from stealing all the cars, but it might make it hard enough on them where they just give up and go to the next.

That’s your biggest dependency. Other than that, there’s nothing you can do to stop it.