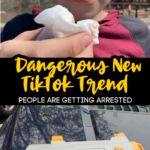 They think it’s all fun and games… until someone gets seriously injured and you get arrested.

Apparently, there is a dangerous new TikTok trend called the ‘Orbeez challenge’ and people are getting hurt.

The trend is taking place all over the US and local police are warning you now… do it and you will be arrested.

With this ridiculous new trend, people are sneaking up and attacking random people with a pellet gun that shoots Orbeez which are gel projectiles.

Some of the people participating in this challenge have even modified the gel beads to inflict more pain on unsuspecting victims.

We continue to see teenagers … discharging splat ball guns (Orbeez) at other people … even at innocent bystanders. Now they are modifying the beads to be more painful.

So far there have been police reports in Atlanta, Philadelphia, the Bay Area, Orlando, and Phoenix… those are just the incidents that have actually been reported.

Officers in Volusia County, Florida also warned of a string of Orbeez shootings in the area leading to four arrests so far.

Not only is this dangerous for those being shot in the challenge, but it also creates danger for the one doing the shooting.

Trust me… one day you’re going to be messing around and mess with the wrong person and find out, and the cops are not playing either because they will arrest you.

Recently, deputies arrested a 19-year-old man who shot an Amazon delivery driver in Deltona, hitting him in his glasses and his neck while he was driving his route. The same shooter also shot another random adult and a 10-year-old child in the face and chest.

If you shoot someone, even with these gel projectiles it is still considered battery, if the person actually gets injured and the skin is broken, that could turn into a felony.

Do you really want to become a felon over some dumb trend that isn’t even funny?

These kids think it’s funny. They’re violating the law. They’re committing a battery. If the pellet happens to injure the person to the point it breaks the skin, could be looking at a felony charge. These things don’t go away. Could affect your future.

Parents, please talk to your kids!

Also, if you are an adult participating in this nonsense, shame on you.