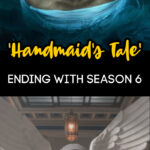 They say all good things must come to an end — but I don’t wanna say goodbye to this!!

Hulu just announced that The Handmaid’s Tale is ending with Season 6, and I could ugly cry.

It has been a true honor to tell the story of Margaret Atwood’s groundbreaking novel and chillingly relevant world, and we are thrilled to bring viewers a sixth and final season of The Handmaid’s Tale

The Handmaid’s Tale is my guilty pleasure. I’ve been watching June and her crusade against everything Gilead since the very beginning.

I can’t even imagine a world where I’m not anxiously anticipating the newest season of The Handmaid’s Tale.

But, here we are.

There is a bit of good news amidst the announcement of our farewell to June, Nick, Serena, Commander Lawrence, and all the others.

There is going to be a sequel to The Handmaid’s Tale, and it will be set years after June popped onto the scene and changed life in Gilead forever.

It is going to be called The Testaments, and it is based on the book of the same name.

We don’t have a whole lot of information — we don’t have ANY information, really — on The Testaments, but you KNOW we’ll let you know as soon as any info drops.

We are about to head into Season 5 of The Handmaid’s Tale. The new season drops September 14th on Hulu, and you KNOW I’m going to be putting the kids to bed early that night!